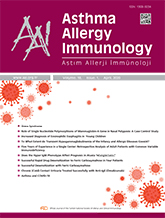 To What Extent do Transient Hypogammaglobulinemia of the Infancy and Allergic Diseases Coexist?

Objective: To investigate the clinical features and follow-up results of the patients with transient hypogammaglobulinemia of infancy (THI) and to understand to what extent the condition coexists with allergic diseases.

Materials and Methods: Between January 2010 and February 2019, 172 patients who had been referred to Ankara University Faculty of Medicine`s Pediatric Immunology and Allergy Outpatient Department for findings of atopic disease or for frequent infections with a suspicion of PID, who were diagnosed with THI, and followed-up for at least one year were included in this study. Their clinical and immunological features and follow-up results were evaluated retrospectively.

Results: Of the 172 patients, 59% were boys. Median time of symptom onset was 14 months (1-46 months), median time of admission was 20 months (6-30 months), and consanguineous marriages were seen in 20% of the families. The most common referral complaints were respiratory tract infections and non-wheezing allergic diseases with rates of 71.5% and 27%, respectively. Cellular immune system analyses were normal. During a median follow-up time of 36 months, 42% of the patients recovered, 25% (n=43) still had THI, 25% (n=43) had unclassified hypogammaglobulinemia (UCG), 4% (n=7) had partial IgA deficiency, and 4% (n=7) had partial IgM deficiency. Allergic diseases were seen in 46% of the patients. An asthma diagnosis was made in 35.4% of the patients, allergic rhinitis in 5% and atopic dermatitis in 12.7%. The skin prick test was positive in 15% of them.