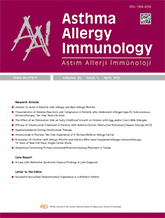 Vitamin D Levels in Patients with Allergic and Non-Allergic Rhinitis

Objective: Allergic and non-allergic rhinitis are quite similar from a clinical viewpoint and allergen sensitivity seems to be the important relevant difference between them. However, the role of vitamin-D (vit-D) as an immunomodulator hormone and on rhinitis phenotypes is not clear. We aimed to investigate the relation between vit-D levels and patients with rhinitis as allergic (AR) and non- allergic (NAR).

Materials and Methods: This was a retrospective research of 228 patients whom were diagnosed at a tertiary hospital between 2012 and 2016. Rhinitis was diagnosed as AR if nasal symptoms were accompanied with skin prick test (SPT) positivity, and NAR if they were relevant with negative SPT. The clinical history of the patients and the symptoms were recorded. Serum total IgE tests were performed using an allergen detection system (UniCAP, Phadia, Uppsala, Sweden), and vit-D levels were measured with the 25-hydroxy-vit-D (25- OH vit-D) kit in the Elecsys 2010 analyzer (Roche Diagnostics, Germany).

Conclusion: The present study showed no association between serum vit-D level and allergen sensitization in adult patients with allergic and nonallergic rhinitis.