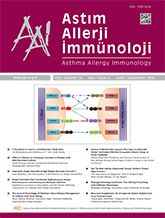 Objective: Despite the high rate of consumption in our country, the definite prevalence of any nut allergy is not known. The aim of this study was to evaluate the prevalence and clinical characteristics of hazelnut and other nut allergies in Giresun, a city where hazelnut is cultivated in large amounts.

Materials and Methods: This study was a cross-sectional study. The prevalence and clinical characteristics of IgE-mediated nut allergy was investigated with the survey method in 6000 randomly selected children, between the ages of 6 and 17 years, from three kindergarden, nine primary schools and two high schools located in the city center of Giresun.

Results: The response rate to questionnaires was 82.0% (4932/6000), and the reported prevalence of nut allergy was 2.7% (134/4932). Among patients who accepted the telephone survey, 49 were thought to have a possible IgE-mediated allergic reaction with nuts. Of them, 25 were female and the mean age was 12.6±3.2 years (between ages 6 and 17 years) and 65.3% of the children had associated atopic disease. Reported prevalence of hazelnut, peanut, pistachio and walnut was 0.4%, 0.3%, 0.2% and 0.1% respectively. The most common symptoms were cutaneous and respiratory. The reactions most commonly occurred at home.

Conclusion: The prevalence of nut allergy is low and the clinical symptoms are mild among school-aged children living in Giresun. Children with suspected nut allergy should be referred to allergy clinics for further evaluation as nuts may cause sudden and lifethreatening reactions.