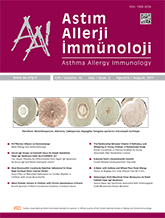 Can Atopic Diseases be Differentiated from Hyper IgE Syndrome by Serum IgE and Blood Eosinophil Levels?

Materials and Methods: A total of 315 patients were enrolled into the study. We evaluated serum IgE (IU/L) and eosinophil (/mm3) values, allergen sensitizations and the age range of patients. ROC curve analysis was performed in order to define an optimal cut-off value for serum IgE levels and blood eosinophil counts.

Conclusion: It is possible to discriminate atopic diseases from HIES when the cut-off values are used are 2500 IU/l for IgE and 1500/ mm3 for eosinophils with ROC curve analysis. An atopic disease is the most likely underlying condition below these values. Moreover, patients with serum IgE higher than 5000 IU/l and/or blood eosinophils higher than 2500/mm3 should be managed as HIES unless otherwise proven.