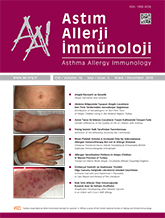 Definition of the Wheezing Sound by the Community

Objective: Wheezing is a word derived from English. However, the parents use different terminologies for the respiratory complaints of their children especially in countries where English is not a mother tongue. This expression variety can lead to difficulties in diagnosis. In this study, we aimed to determine how people describe the sound of wheezing.

Materials and Methods: The video, prepared for the video questionnaire method by the ISAAC study group (International Study of Asthma and Allergies in Childhood), was watched by volunteers with the help of smartphones. In the first stage, they were asked to describe the voice in the video they watched. In the second stage they were given options and asked which is the closest description for the sound they heard. The descriptive information and socioeconomic status of the volunteers were recorded.

Results: 322 volunteers with a mean age of 36.1 ± 9.4 years participated in this study. 52.2% of the participants were male. 66.1% of the participants had heard the voice played on the video before. It was determined that 322 participants used 55 different definitions for the wheezing sound. The most frequently used definitions were shortness of breath (23.2%), grunting (15.8%), choking sound (11.1%) and asthma patient crisis noise (9.3%). The wheezing accounted for 1.2% of all answers. Significant differences were found between the answers for the wheezing voice (p = 0.005 and p <0.001, respectively), depending on the sex of the participants and whether they had an allergic disease history in their family. At the end of the study, 5 options (wheezing, grunting, cat meow voice, bubbling and scraping), derived from the first stage of study, were presented to the participants and they were asked which was the most suitable expression for the voice they listened. The three most answered options were wheezing, grunting and cat meow voice.

Conclusion: The volunteers reported several definitions for wheezing. Other definitions should also be used while questioning for wheezing in the clinics. In addition; describing a correct and easily understandable definition that is perceived by public can provide a better understanding of symptoms in both clinical and field studies.