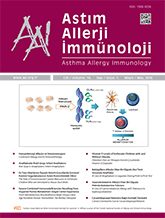 Cockroach Allergy and Its Immunotherapy

Cockroach allergy has been considered as an important cause of respiratory allergic diseases for over three decades. The most common domiciliary cockroach species are Blattella germanica (German cockroach) and Periplaneta americana (American cockroach). Blattella germanica is a small cockroach, approximately 16 mm in length, which commonly infests houses worldwide. Periplaneta americana is a large cockroach, approximately 35–53 mm in length, that infests houses, schools, hospitals, and other large buildings. There are more than 20 different cockroach species in Turkey, and Blattella germanica is known as the most common. In the United States, the prevalence of cockroach allergy ranges from 17 to 41%`in various studies involving both children and adults. European studies on children and adults attending an allergy clinic show a high variability in cockroach sensitisation varying from %4–26. In Turkey, cockroach allergy prevalence rate varies from %2.2-51.4 in different studies consisting of both children and adults. Tropomyosin, designated as Bla g7 and Per a7, has been identified as a major allergen in cockroaches. Tropomyosin is also an important allergen involved in cross-reactivity among insects and invertebrates including mites, crustaceans, mollusks and parasites. Cosensitization to other invertebrate allergens in cockroachsensitized individuals is a common feature. Consequently, parasite infestations could regulate allergic reactivity through cross-reactive antibody responses. A sustained decrease in cockroach allergen levels is difficult to accomplish even after successful extermination of cockroach populations and commercial cockroach extracts used for diagnosis and treatment remain non-standardized. Although some of the studies suggest that cockroach immunotherapy may be effective, further randomized, controlled clinical trials, using wellcharacterized cockroach extracts, and with larger number of patients and longer follow-up are required to establish the efficacy and safety of specific allergen immunotherapy in the treatment of cockroach allergic patients.