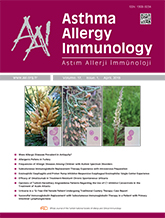 In this study, atmospheric pollen data of previous studies belonging to 54 different stations in Turkey, conducted by using the gravimetric and/ or volumetric method, were evaluated in terms of flora, biogeography and aeropalynology. In line with these data, Turkey is divided into 5 aeropalyno-geographical regions, which are represented with their characteristics (North, West, South, Central, and East), and the skin prick tests were evaluated on the basis of pollen allergy data regionally and concurrently.

In general, the dominant pollen seen in Turkey`s atmosphere has been found to be represented by 29 different types. The pollen sum of these 29 taxa was found to represent more than 85% of the total pollen concentration detected in the atmosphere when evaluated according to different regions. Of these pollen types, 20 belong to woody and nine belong to herbaceous plants. It has generally been reported that there are higher pollen concentrations of woody plants in the atmosphere in Turkey.

Overall, Cupressaceae/Taxaceae, Pinus, and Gramineae pollens were found as the common types to all of Turkey`s five aeropalyno-geographic regions, in which they were recorded within the first three dominant pollen types. It has also been observed that Quercus, Platanus and Populus pollens from woody plants, and Amaranthaceae and Urticaceae pollens from the herbaceous plants were commonly recorded in high amounts for all regions. However, when the revised data are examined in detail, it has been determined that tree pollens like Fagus, Carpinus, Alnus, Corylus and Betula in the atmosphere were characteristic for the Northern Turkey region; the highest amounts of Olea europaea pollen for the Western Turkey region; higher quantities of the Cupressaceae/Taxaceae pollen for the Southern Turkey region; and very high amounts of Gramineae, Morus, Fraxinus and Artemisia pollens for the Eastern Turkey region have been recorded as characteristic in the atmosphere.

Compared to Europe; Morus, Salix, Populus, Mercurialis and Plantago pollens in the atmosphere of Turkey differ in their presence and quantity. On the other hand, invasive plants such as Ambrosia and Ailanthus or exotic plants such as Casuarina and Eucalyptus, which have allergenic pollens, must be remembered among the dominant taxa in the air in different regions on a seasonal basis. It has been shown that the ideal allergen panels have to be updated according to the area and especially by including the dominant taxa. However, these updates should be made by taking into account cross-reactions, and at least one of the reacting taxa should be included in the panel.