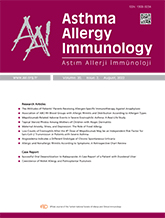 Allergic and Nonallergic Rhinitis According to Symptoms: A Retrospective Chart Review

Objective: Symptoms of the patients can guide whether the rhinitis is allergic or non-allergic. Our aim is to identify the prominent symptoms of allergic and non-allergic rhinitis and to evaluate the relationship between the symptoms and disease severity, symptom frequency, and comorbidities.

Materials and Methods: Patients with rhinitis symptoms were retrospectively evaluated in terms of predominant symptoms, symptom severity and persistency and sensitization patterns.

Conclusion: Sneezing, eye symptoms and itching were the most common symptoms in allergic rhinitis patients while nasal obstruction and postnasal drip were more common in non-allergic rhinitis. In addition, the presence of nasal obstruction and postnasal drip may indicate that the disease is more persistent, more severe, and often accompanied by chronic rhinosinusitis, nasal polyposis, and asthma.