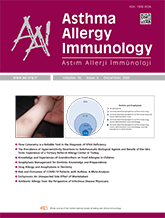 The Prevalence of Hypersensitivity Reactions to Antirheumatic Biological Agents and Results of the Skin Tests: Experience of a Tertiary Referral Allergy Center in Turkey

Objective: The use of biological agents (BAs) has increased dramatically for inflammatory diseases and this increase has led to a rise in hypersensitivity reactions (HSRs). The symptoms and diagnostic tools for HSRs are not standardized. We aimed to analyze the prevalence of HSRs to anti-rheumatic BAs and to evaluate the usefulness of skin tests (STs) as a diagnostic tool.

Materials and Methods: Our study was conducted at the Ege University Medical Faculty, Department of Internal Medicine, Division of Allergy and Clinical Immunology and Division of Rheumatology, Izmir, Turkey. Four hundred sixty patients who received BAs between Jan 1st, 2015, and Jan 1st, 2016, were reviewed in this retrospective cross-sectional study. The prevalence of HSRs was retrospectively evaluated. Ten patients with HSRs were evaluated with STs containing commercially available culprit drugs. The data was collected from hospital records. The age, sex, atopic diseases, primary rheumatic diseases, and anti-rheumatic therapies of the patients were recorded.

Results: Two hundred fifty patients were treated with rituximab (RTX), 45 with infliximab, 40 with tocilizumab (TOC), 36 with golimumab, 35 with etanercept, 34 with abatacept, 15 with certolizumab, and 5 with adalimumab. Fifty reactions with RTX and two reactions with TOC were infusion-related (IRRs). Ten HSRs were observed. Eight patients had immediate (7 immediate systemic reactions and 1 local injection site reactions), and 2 had late-onset cutaneous reactions. We detected the ratio of IRRs as 11.3%, immediate HSRs as 1.73%, IgE-mediated reactions as 1.08%, and anaphylaxis as 0.86%. STs were positive in 5 of 8 patients with immediate HSRs. Four of them had anaphylaxis, and remarkably, 3 of these had positive STs. None of the ten patients had high levels of specific IgE and only four had atopic diseases. Total IgE levels were not high and specific IgE levels were not positive in the presence of HSR to BAs (p=0.039).

Conclusion: Five of the 8 (62.5%) patients with immediate reactions had positive STs, which suggested IgE-mediated reactions. The prevalence of HSRs to BAs was less than the ones mentioned in the literature.