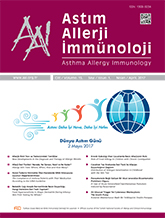 Distribution of Allergen Sensitization in Childhood with the Skin Test

Objective: Skin prick testing (SPT) is widely used for assessing the clinical reactivity to aeroallergens, foods, and drugs. The aim of our study was to investigate the prevalence of allergic sensitivity in the patients presenting to our clinic.

Materials and Methods: The retrospective study included 2,512 patients who presented to our clinic and underwent SPT due to suspected atopy between January and December 2014. SPT was based on sensitivity against house dust mites, molds, pollens, and foods including milk, egg, wheat, chestnut, and latex. Based on their ages, the patients were divided into four groups: Group I; 2 years or younger, Group II; 3-5 years, Group III; 6-12 years, and Group IV; over 12 years. The SPT scores were evaluated based on the age groups, gender, and the month.

Results: The 2,512 patients included 1,444 (57.5%) boys and 1,068 (42.5%) girls. At least one SPT was positive in 1,058 (42.3%) patients. Skin test was positive in 44.8% of boys as compared to 38.4% of girls. Multiple allergen sensitivity was present in 93% of the patients. Most of the patients were allergic to house dust mites [Dermatophagoides pteronyssinus (%73.8) and Dermatophagoides farinae (%71.6)], followed by mold (23.4%) and grasses-cereals mix (23.8%). Among the foods, eggs (3.8%) and milk (3.1%) had the highest rate of allergic reaction. No patient had allergic reaction to latex. Among the age groups, Group III had the highest rate (50.4%) of positivity. An evaluation based on the months revealed that the patients were sensitive against aeroallergens, particularly pollens, in May and June, against molds in May and September, and against house dust mites all year round.

Conclusion: The skin prick test is a practical method for the assessment of allergic sensitivity.