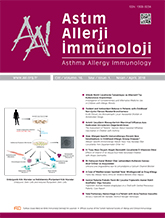 Objective: Specific immunotherapy (SIT) is a well-established treatment method that is suggested to alter the natural course of the disease. Although the mechanisms remain unclear, recent studies have shown that allergen-specific immunotherapy may reduce the risk of new sensitizations. The aim of this study was to evaluate new sensitizations in children who underwent SIT for allergic airway diseases: allergic rhinitis, allergic asthma or both.

Materials and Methods: This retrospective observational study was conducted at Behçet Uz Children`s Hospital, among children with an allergic airway disorder due to monosensitization. The SIT group consisted 67 patients who had been offered, and accepted, and thus underwent SIT regularly during four years while the control group consisted of 57 patients who had been offered but refused SIT, and thus had not undergone SIT and were treated with medications only. The allergens that were negative at the first skin prick test but positive at the second prick test were accepted as `new sensitization`.

Results: The SIT group consisted of 67 (mean age ±SD: 15.27±3.15; Male /Female: 42/25) while the control group included 57 (mean age ± SD: 12.61 ± 2.69; Male /Female: 35/22) monosensitized patients with allergic airway disorder. There was no significant difference between SIT group and controls considering age and gender, current airway disease and current responsible allergen (p>0.05). The rate of new allergen sensitization in the immunotherapy group was 26/67 (38.8%) and slightly higher than control group (14/57; 24.6%) but the difference was not significant, statistically (p=0.12). The most common allergens causing new sensitization were pollens of grass (12/40), animal dander (7/40) and olive tree (6/40). When newly sensitized patients were evaluated, the atopy incidence was significantly higher than patients with no new sensitizations (32/40 vs 8/40).

Conclusion: We suggest that SIT may not prevent new sensitizations in childhood allergic airway diseases in monosensitized patients. The most important risk factor in developing new sensitization is presence of atopic disease in the parents.